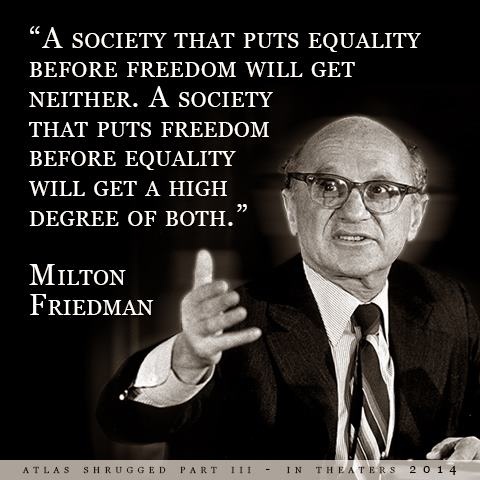 The last couple of days I have been immersed in reading, listening and re-reading the works based on Ayn Rand and Milton Friedman. I do believe like most professions, some economists are quacks and others like Milton Friedman were great thinkers and philosophers, who really challenge the conventional thinking. When I look back, this thinking is what really attracted me to go and do a Masters and continue to work on a PhD in Economics. I still think the behavioral side of economics is just fascinating. The book that I just finished reading and listening (new offer in Amazon, if you buy a book you can get the audiobook for a discounted price… it works for me given I consume books in multiple ways) is “I am John Galt – Today’s Heroic Innovators Building the World and the Villainous Parasites Destroying it” by Donald L. Luskin and Andrew Greta. It really made me want to rethink how I categorize all those people I interact with given I interact with a whole spectrum of people, from Entrepreneurs to Investors to Bureaucrats to Charlatans to Banking Executives to Leaders of Industries and everyone in-between. I wanted to quote Milton Friedman on a simple idea on the Freedom and Liberty to make your own choice about any idea that you come across, he said:

The only person who can truly persuade you is yourself. You must turn the issue over in your mind at leisure, consider the many arguments, let them simmer, and after a long time turn your preferences into convictions.

Just brilliant, I am baffled when I meet people who have such strong convictions about ideas that they have not given considerable thought or analysis. I come across posts on facebook where people share articles that talk about how bad a specific political party is acting, the same people turn around and take stabs at saying that governments should raise taxes on private enterprises. I think Milton Friedman was right, he explained it in a very simple manner:

I believe governments have a very important and critical role to play, and that is the role of an Umpire. The role of the government or governmental institutions is not be a dictator or even a paternalistic provider. The umpire enforces the rules, mediates disputes, and maintains a free field of play; the umpire does not dictate outcomes or advantage one team over another. What we see all around the world is that artificial rules are being enforced to continue the enterprise of governmental institutions. Rules that do not align with the above definition of the role of governments. The need for government is also clearly articulated by Mr.Friedman:

The need for government in these respects arises because absolute freedom is impossible. However attractive anarchy may be as a philosophy, it is impossible in a world of imperfect men. Men’s freedoms can conflict, and when they do, one man’s freedom must be limited to preserve another’s-as a Supreme Court Justice once put it, ‘My freedom to move my fist must be limited by the proximity of your chin.

Every place in the world has governments, rules and everything else in-between. However, I believe every single human being on this planet is ordained with the freedom and liberty to pursue their happiness. I also believe that Entrepreneurship is by far the purest form of expressing and realizing one’s own freedom and liberty. Anyone in the world today except those living in countries that have “governments” that oppress their citizens, is free to choose this path of entrepreneurship. It is hard, it is riddled with booby traps, but if you have the discipline, the courage and perseverance to ride through it then you create real wealth, value and maybe, just a maybe your true purpose in life.

One thought on “Free to Choose”