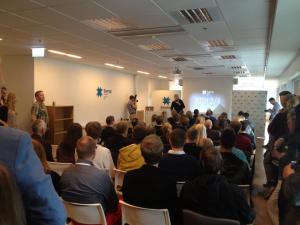 Startup Reykjavik the mentorship driven accelerator for Startups organized by Arion Bank and Innovit+Klak announced the new batch of companies in Startup Iceland. Last evening, I participated in the Pitch and BBQ event organized by Startup Reykjavik. It was incredible to see the energy and the number of people who participated. The Startup Community in Iceland is starting to really get formed and this is a great feeling. I dreamed of this day and I am so impressed that it is happening right now. I had written about the strategy to reboot Iceland on December 15, 2011, it is amazing to see how the Startup Community in Iceland has risen from the ashes and is rebooting. It was exciting to see more than 150 people, I know this number because the Startup Reykjavik team ran out of hamburger buns and they had bought about 150 buns :).

It was awesome to hear the pitches of 5 teams that are part of Startup Reykjavik, the positive energy, the optimism and a sense of building something new was all there. I was even impressed that the new British Ambassador to Iceland was participating and seeing the energy. Met with a team from Copenhagen that is part of the Startup Community in Copenhagen and a lot of new faces. I am pretty sure we are moving in the right direction in Iceland, there will be bumps along the way but I am lot more optimistic about the prospects of startups coming out of Iceland from now.

There is still one thing that is bugging me, while we are creating the infrastructure to build new companies, it is painfully obvious that the investors are not present in these gathering. I saw a couple of them but I am pretty sure if you go to a similar event in Silicon Valley or New York or Boston or Austin, half the room would probably be filled with Analysts from Venture Capital firms. We still have a scenario where Entrepreneurs are chasing Investors in Iceland rather than the other way around i.e Investors chasing Entrepreneurs. That is the change I would like to see in Iceland, when that happens we are on solid ground.