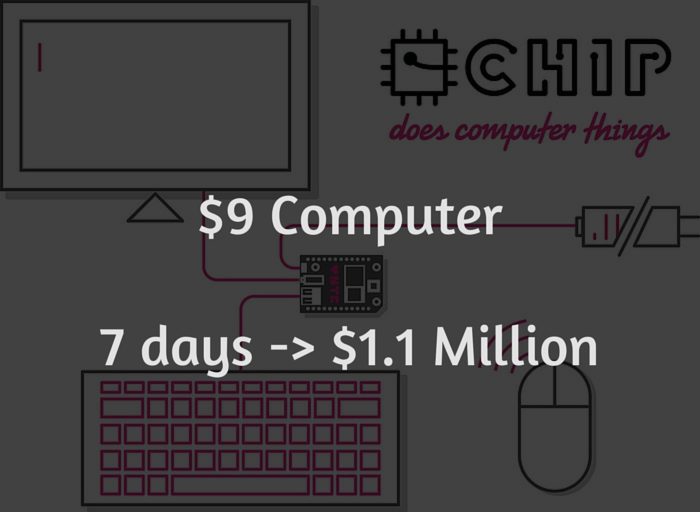 Note: Want to hack something similar with me? Join us on the Vodafone Startup Iceland 2015 Hackathon on Saturday May 24th and Sun May 25th

I was thoroughly impressed when I heard about the Raspberry Pi project .. a sub-$100 usable computer, available for the masses.

A computer for the price of a pint!

What’s really impressive is that they raised their minimum ($50.000) in 6 hours on Kickstarter.

“The specs must suck then!”

Actually, for the price, the specs are very good .. 1GHz core, half a gig of ram and 4 gigs of storage.

How does it look?

Pretty damn bad-ass if you ask me. It’s similar to my Arduino board, which is pretty small.

A company called Next Thing Co., a company based in Oakland, CA.

How did they get such a traction?

In May of 2014 (a year ago today), they announced OTTO, the hackable GIF camera (yes, you read that right … a GIF camera).

I remember all the tech buzz surrounding it when it was announced. It got a lot of publicity but unfortunately it only raised $70.000, only $10.000 over their goal.

This time though, they already had the momentum and the tech buzz connections to make this tiny computer a massive hit.

OTTO is based on Raspberry Pi.

My guess is that they will be using their computer to power a new version of OTTO, making it more affordable and profitable (going from $99 to $9 for a single part is a huge step in reducing cost and increasing margins). But since CHIP was such a success, it’s hard to speculate if they will continue with OTTO or focus on making CHIP a leadership product.

They must have built up a buzz for such a successful launch, right?

Well .. yes and no .. I didn’t hear or read anything about this computer until today (but then again, I’ve been keeping myself away from the news lately).

I went through their twitter timeline and it was pretty much silent with only a couple of tweets about what was happening with OTTO, right until May 7 when they announced the Kickstarter campaign for CHIP.

Before the Kickstarter campaign, there were no news about this thing.

They built a buzz – Yes?

My guess is that they learned a lot from the previous Kickstarter launch, and got a LOT of useful press contacts.

So they had the previous experience of launching their previous campaign along with learning what things should have gone better and their press contacts.

I believe the sequence for this launch was something like this:

I believe they have a perfect execution (according to the figures I’m seeing) in building the buzz really quickly and effectively.

The hard part will be maintaining and building the momentum.

What will the final numbers be? Please guess in the comment section

I don’t know what the final numbers will be .. they’ll be at least a million, but I’m interested in seeing if they’ll reach $3 million ..

you might think that according to their momentum, they should reach $3 million easily, but I am a bit skeptical, knowing the inverse logarithmic effect of capacitor charging. (or .. reverse hockey stick effect)

But I might be wrong .. and that’s where you come in!

Give me your BEST GUESS of what their final Kickstarter number will be in the comments below.

Want to hack a similar project?

The Vodafone Startup Iceland 2015 Hackathon is all about Digital stuff.