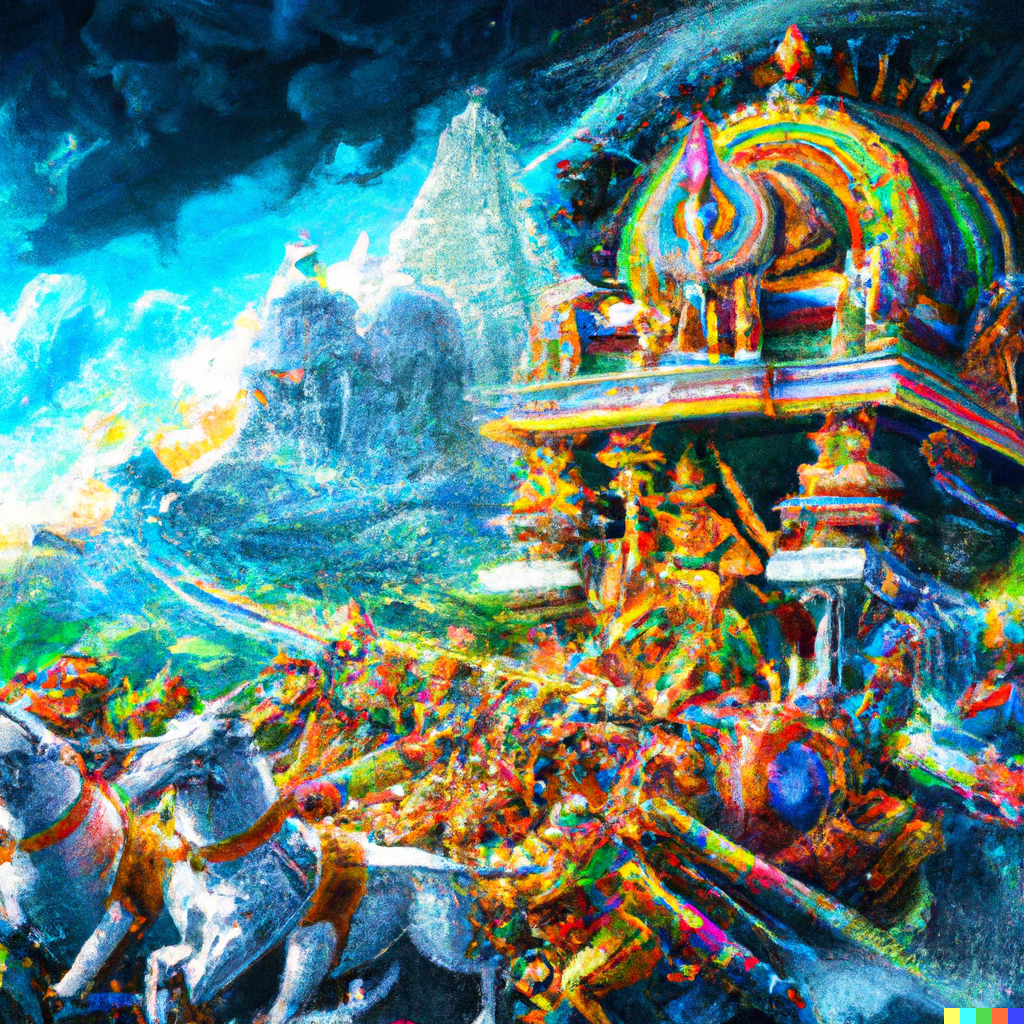 Featured Image: created using DALL-E, description of the image is South Indian Temple and hindu gods flying in chariots with nuclear weapons fired by all the soldiers, digital art

A number of people, influencers and thought leaders have been predicting the unprecedented exponential progress and destruction of the human existence due to the advancement of A.I. The most dystopian version has already been imagined and made into blockbuster movies by Hollywood. For those of us who have been thinking and working in the trenches of startups, software development and engineering know that progress in technology is always exponential but the overall timeline is blurred so no-one really knows where we are in the technology and A.I. evolution. That being said we are starting to see the inflection point with the release of first, the GPT-3 and now the ChatGPT applications by the OpenAI initiative. The most exciting things in the OpenAI initiative are the Models used to create the applications. I am very impressed with Codex, the codex model is derived from the GPT-3 models to work on understanding software code, generating code and explaining code. The data for this model is from millions of lines of code from GitHub and the other models that were used to build the Natural Language understanding and responses of GPT-3. This is scary good and my bet is it will dramatically improve software development. The software engineering discipline is built on “typing” a lot of instructions and what was impressive with Codex was its ability to generate some of the foundational blocks of code. I also believe this can accelerate learning of software engineering because it has the ability to explain any code provided.

If you have not played around with these tools I highly encourage you to do so and if you are a founder and not exploring how to use this in what you are building you are missing out on one of the most exciting levers that startups have, which are technology, fresh thinking and incorporating new things into what you are building. I remember in 2013 when I took over as CEO of GreenQloud, I thought everyone should be migrating fast to Cloud computing but it took maybe 5 years before Cloud computing became mainstream technology. I think the adoption curve is probably going to be similar with A.I. but maybe I am wrong and it is already too late. I am recommending to all our teams that they should be aggressively looking to adopt A.I. in everything they do.

To make the point about the blog, I asked ChatGPT to write a blog post about ChatGPT and this is what it wrote:

There was more but you get the point. This is a fascinating technology and accessible to anyone for a price. I think the evolution of the OpenAI is also interesting as it started as a democratization of A.I. to capped profit model i.e. 100x for those who invested in the OpenAI platform. Microsoft was the first company to invest $1billion in 2019 and OpenAI has all the usual suspects of Silicon Valley, Reid Hoffman, Elon Musk, Peter Thiel etc again I am not against any of them investing in this technology but they are an elite group of people who have been investing in generational technologies that change the course of human trajectory. One only hopes that these people do what they say and say what they do, the jury is out on that notion. Just because these people are behind the company it does not mean the company should act according to their wishes. You can read more about the OpenAI charter here.

The OpenAI also has an Image generation tool based on the DALL-E models. The tool has the capacity to generate images based on text input. A number of people have been building art based on the DALL-E models using OpenAI. The speed at which the AI generates these images is again scary fast and I am not sure how this will impact our understanding in the digital world because even today we can appreciate the statement that “On the Internet, no-one knows you are a dog”. Now we will not know if the image or video of a dog on the internet is a real dog or created by AI. As these things get more and more real in the digital world the only way to ground ourselves is to never believe anything without verifying for ourselves. Understanding what is true and what is not true on the internet becomes more and more difficult but not any different than it used to be. We have grown accustomed to lazy thinking i.e. not doing our own homework on what we believe to be true and what is not true. This has serious consequences as we saw with a number of conspiracy theories. Maybe we need AI more than ever to decipher what we see on the internet and now you can with OpenAI. To that end, maybe this blog was not written by BalaInIceland 🙂 the challenge to you is to verify if that is true or false.