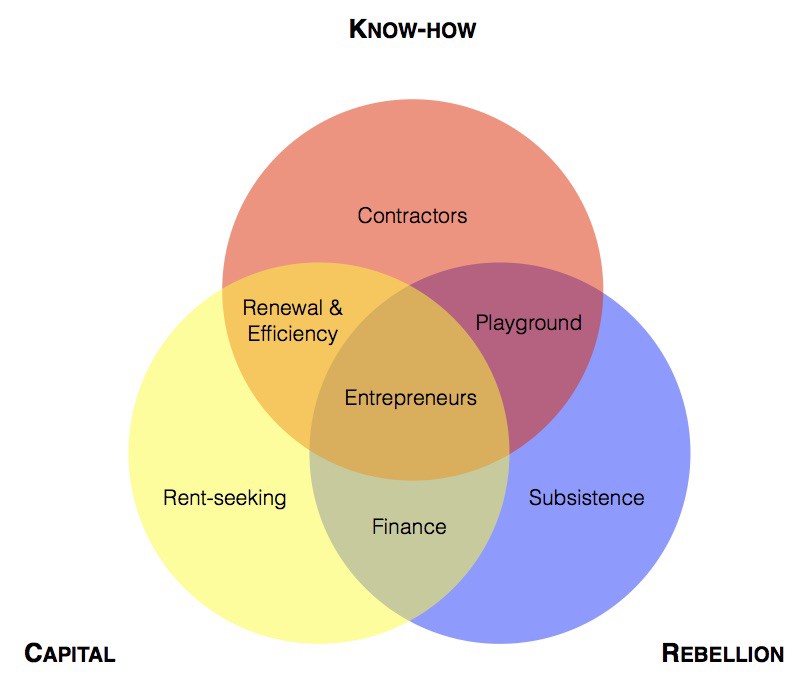 It has been an interesting and inspiring to see what Ken Bautista and Cam Linke with their team have done through Startup Edmonton in building a vibrant Startup Community in Edmonton. There are so many learnings that I want to take back to Iceland, but we are thinking of doing something better than that, keep a look out for further announcements. Coming back to the State of the Union in Iceland as it relates to building the Startup Community, I thought it would be apt to take the Model that has been developed by Nicolas Collin. The reference to the model comes for a post that Nicolas wrote, it is probably one of the best descriptions of a complex process of the evolution of Entrepreneurial Ecosystems.

Iceland has come a long way, I believe we have changed the mindset within the broader community that Startups and Entrepreneurs are valuable resources in building a country. I cannot emphasize how important this inflection is for the long term sustainability of a small country like Iceland. Any resource dependent economy, in the case of Iceland, it is the Ocean, Renewable Energy and now the Nature, being a rent seeker is the preferred model. However, since the financial collapse Iceland has transformed into a place where Creative, Rebellious and Courageous can build valuable companies with nothing but their wits, sweat and technology.

There are a number of examples, but I will focus on the three ingredients that enable development of a sustainable entrepreneurial ecosystem.

Know-How: When I started working with Founders in Iceland in 2009, there was very little know how on the path to building companies from an idea. The conventional thinking was ideas come to life only after someone invests money in the idea. This thinking is true to a certain extent but it is not the whole truth. In addition, the thinking then was it usually take 15 years to create value from being a Startup Founder or Entrepreneur. We disproved that concept when CLARA was acquired by Jive Software in less than 3 years since we first invested in them. Since then there has been a flurry of exits for Founders and the model and thinking has changed. Founders today understand that building companies is hard but it can be done. Funding is still a challenge in Iceland, not in all stages, but in some of the critical stages. We have plugged the Know-How gap by bringing people who have solved this problem before and thought leaders to events like Startup Iceland Annual Conference, the accelerators and other successful founders from Iceland actually coming back from Silicon Valley and investing in Iceland. I think we are solving the Know-How problem from the company building part, but still there is a huge knowledge gap when it comes to investor know-how on how to create value in venture investing.

Capital: I think Iceland has enough and more capital but it is devoted to the Rent-Seeking business of Fishing, Tourism, Real Estate and Heavy Industries (Power for Aluminum Smelters). We have seen a welcome change this year when 3 new Venture Funds closed. However the results have been disappointing. I have been speaking to Founders who have met with the Venture Funds that have closed in Iceland and the fund managers have not been impressing the Founders. I just hope that Venture Funds in Iceland do not lose the opportunity to work with Icelandic Founders. I can think of a couple of scenarios, the most troubling one would be the Founders just leaving Iceland to other markets to raise capital. This has proved to be an effective model, as demonstrated by Plain Vanilla Games the makers of the QuizUp trivia game which has been making tremendous progress. I think what Icelandic Founders want are Venture Investors with Capital, Network and Know-How. We are solving the capital problem but I am not sure how we are solving the know-how problem as it relates to VC knowledge. I also believe there is a huge gap in the need for capital in the range of $100k to $300k, as most of the newly closed funds are only writing checks of $1m or above, which is a problem.

Rebellion: I think Iceland has enough rebels, but with the economic growth starting to take roots there is a risk of a number of the rebels just choosing to go and work for established companies. I think there is nothing that can be done to stop this trend other than show success in the Entrepreneurial journey.

3 thoughts on “State of the Union – Startup Community in Iceland”