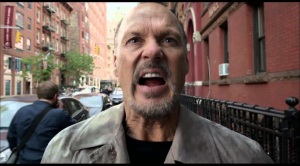 I saw Birdman last week. It was superb, Michael Keaton was incredible. It is a movie about a movie star famous for playing a superhero and a box office champion. His hollywood days are over and he is trying to do something new, artistic, meaningful and something that matters to him in Broadway at the end of his career. Everyone and everything is against his effort. Critics think he is a spoiled hollywood star, his colleagues try to sabotage his work, he is going broke to fund the play… you name it he is going through it.

The movie was great at depicting what every Startup Founder and Entrepreneur goes through while they are building their vision. It is extremely easy to brush off someone for their ideas or vision or even their effort. Who are they to dream big, challenge the status quo, shall I dare to say… change the world? well, the movie resonated with me. One of the biggest mental challenges a startup founder goes through is termed the imposter syndrome, i.e the self doubt that what they are working on does not amount to anything and they are fooling everyone into believing in their vision although they may have had incredible success in their life to the contrary.

The impostor syndrome (also spelled imposter syndrome), sometimes called impostor phenomenon or fraud syndrome, is a psychological phenomenon in which people are unable to internalize their accomplishments. Despite external evidence of their competence, those with the syndrome remain convinced that they are frauds and do not deserve the success they have achieved. Proof of success is dismissed as luck, timing, or as a result of deceiving others into thinking they are more intelligentand competent than they believe themselves to be.

If you are a startup founder and you are going through the self doubt, go watch the movie you will be pleasantly delighted. I was, and it has some great performances by a star cast. The director has a way of sucking you into the movie especially the performance of Michael Keaton, I am sure he should get an Oscar nomination for his performance.

One thought on “The imposter syndrome”