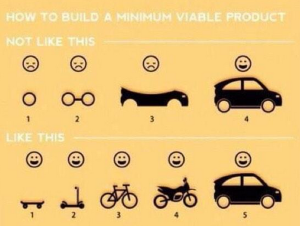 I think it is important to start with big vision, but have the courage to narrow the problem down to a small enough value that you can build it, validate it and also create value for your customer. I meet many startup founders who are doing something that is in either of the extremes. What I mean by this is that in one extreme the founder is doing a marginal improvement on an existing technology and the other extreme is to solve world hunger or climate change or something that is an aggregation of many problems. I believe in having grand visions, yours truly has one. Starting with the bold vision and trying to solve the biggest problem usually results in either the founder or investors burning out. I think Shai Agassi with Better Places will vouch for that. I had to rein in our own rhetoric at GreenQloud when I was the CEO there. We believed that we want to solve the problem of Data Centers becoming the biggest polluters in the world, however having the right product or service was the key.

So, how does one start? this is what was covered by Emmett Shear, Founder and CEO of Justin.tv and Twitch,  in the 16th lecture of the How to Start a Startup class. For those of you who don’t know what is Twitch, check it out. This is the counter culture that has been developing for quite sometime. Ask your kids, what do they watch on YouTube and in all likelihood they say they watch someone playing a game. Content is being created by millions of people who play videogames and post them on youtube or Twitch or many different video viewing channels. It would not be an exaggeration to suppose that there could be movie theater sized halls that will engage and enable hundreds of people to play a multiplayer game just like we watch movies. I am pretty sure there is someone already doing this.

Emmett explains how to talk to your users (and non-users), and how to build a better product based on what they say.  The lecture has been annotated by many people read the lecture. It is never too late to conduct these interviews. I also wrote about how to run 5 day prototype building sessions as done by Google Design Labs. This is hard work and you will not get it right the first time, the important thing to do is be persistent and understand that a journey of 1000 steps starts with the first one you take. I have been a student of building startups and I can say that sequencing and doing the small things and focusing on the immediate problem without taking your eyes of the grand vision are all hard things to do. This is not simple and it should never be simple, it has to be hard that is what makes this fun. Let me ask you, are you doing these things?