I met Hilmar Gunnarsson right after we had invested in CLARA and he was part of a team that was starting to look at investing in Startups in Iceland, which was a great validation for what I was doing in 2009, 2010 in Iceland as everyone thought that it was crazy to invest in Iceland. Hilmar and his team had done a bunch of investments and Hilmar also has the experience of having worked in a startup, the old OZ from Iceland, the company that gave rise to many startups in Iceland. Fast forward to 2013, I got a chance to see what he was doing and it fascinated me. We had just got Bre Pettis and Jenny Lawton of MakerBot to come to Iceland to talk about Industrial Revolution 3.0 using 3D printing and here in tiny Reykjavik Hilmar and his team have been working secretly on making the Next Industrial Revolution a reality. I saw a demo of the iPad app that allows kids to collaborate and make their own toys, or actually print the parts in a 3D printer and assemble them. The software of Modio makes sure the pieces that are used to assemble the toys fit nicely like lego. It was awesome! I loved it, it is way cooler than printing a candle stand. In addition to that he had made the pieces and parts hollow so wires could be run through them and there was a part designed to act as a battery compartment. Not only can you not print your own toy but actually make it come alive and move. How cool is that if you are a 10 year old kid? heck I want one! I loved Mechanical Set when I was a kid and I would love to have this. 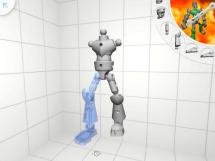 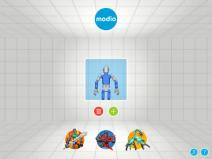 The Modio app is available in the app store. Check it out. It is really cool. You do need a 3D Printer to print your own toy, but now that we have a number of people interested in 3D printing based on the interest and response we have on the Startup Iceland conference (all the early bird tickets are gone, but if you have read this far I have a secret promo code embedded in the blog post for you to a $100 discount on the ticket price) Can you guess what that is? Ok it is MODIO3D… use it to reserve your ticket. BTW, did I mention that our Startup Iceland Hackathon will have two 3D Printers and you get a chance to come and see it work and make something.