I was reading an article in the guardian titled “Microsoft threatened, as smartphones and tablets rise, Gartner warns” and another post by Fred Wilson/Christina about “Monopolies and Startups” both are connected to the theme of transformation that I have been referring to for sometime now. My colleague was telling me that someone asked him a question What about Surface? when they were discussing some device and technology choice, and his response was What about Surface? i.e who cares? That is the problem, when fringe products that are suppose to appeal to everyone usually does not appeal to anyone. Focus and niche strategy is the best way to launch a new product. It also goes back to the Innovators dilemma, on the new entrant. Microsoft is a new entrant in this space, and they should have acted like one instead they are acting like a big company they are which is sad to see because have many choices is good the consumer. In additino, the interesting part about these transformations is that everyone ignores it until it is too late. The Gartner report about the rise of Smartphones and Tablets is very interesting because few of us were seeing this before it has hit mainstream. IMHO, Microsoft lost out on this battle and Google has gained a huge advantage with their Chromebook, Android Ecosystem. This is the projection of Gartner and Fred Wilson actually wrote about this a while back. 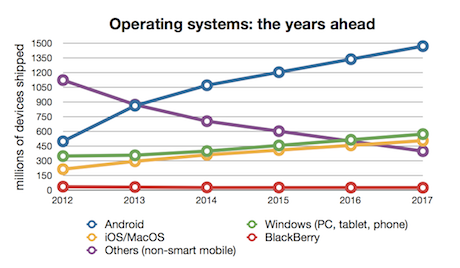 I believe the problem with the competition to the Android and iOS ecosystems should have been fought by Microsoft in a different way. They should have entered the low end market i.e a price point that works in large markets like India, China or Brazil or Latin America less that $150 like the Chromebook with their new operating system. The problem for Microsoft is that they want to be in the enterprise and the Enterprise IT is getting consumerized right in front of our eyes, Deloitte, one of the big 4 Accounting and Consulting firms allows their consultants now to bring their own device and they even subsidize a iPhone 5. I know because my wife just got a new iPhone and she DOES NOT like Apple products, but she now loves her new phone. I think it is a matter of time before the smartphone/tablet User Interface takes over the Laptop/Desktop. I think that is the inflection point that Gartner is alluding to. I think the biggest winner in this over the long haul is going to be Google, because they are very quietly innovating and coming up with Cloud based solutions that work seamlessly with their Android and Chromium ecosystems. Microsoft has found itself in a perfect storm, the assault by Apple in the high end devices and by Google, Amazon and many smaller startups in the lower end. To add insult to injury, enterprises are starting to see if they dont adapt their IT systems they will be left behind by their competitors so they are also looking for newer things that consumers are using. All the people who sell to the Enterprise continue to live in this dream world of yesterday. I have a strange feeling that in a couple of years, I will refer to this post to say I told you so. Consumers i.e employees in the enterprise will dictate what kind of software and device and infrastructure they want to run on rather than the IT department.